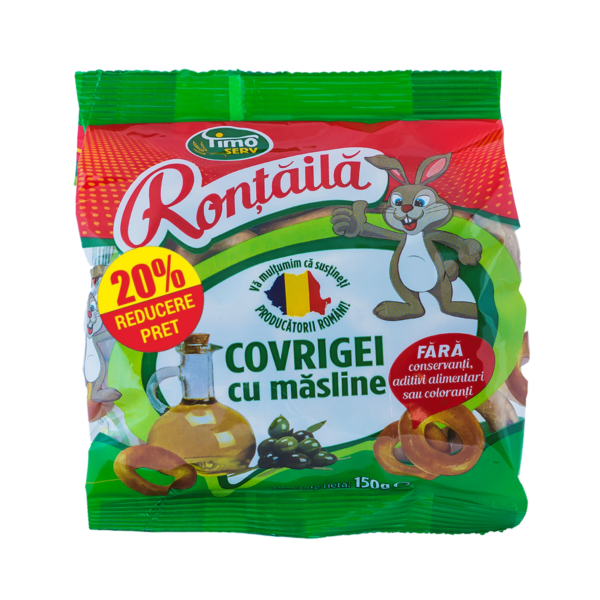 Once in a while, Rontaila tries out new recipes. One warm spring evening, he came up with a new idea. You could hear all kind of noises, all night, from his little kitchen. In the morning, our bunny was so happy. He had just finished baking his first olive pretzels.
He had found the recipe for pretzels with olive paste and olive oil, tasty and crunchy pretzels, made only with natural ingredients.He has used olive oil for a nice mediteranean taste, wheat bran for a higher nutritional value,sea salt and glucose syrup to complete the unique taste of olives.

But Rontaila cannot rely only on his opinion, when he creates a new product. So, in the morning, he filled up a basket with olive pretzels and went for a walk in The Land of Sweets.
Every time he met a bunny, he would ask him to taste some pretzels and tell his opinion about them. Our master bunny had spent the entire morning collecting compliments, from the bunnies he had met. At noon, when he returned home with his basket empty, had a surprise. He found a crowd of bunnies waiting in front of his little pantry, from the back of his house. All the bunnies were waiting for the olive pretzels, they had tasted earlier, in the morning.

He had nothing else to do, than returning to his kitchen and starting to prepare new pretzels. The bunnies which were looking from his window kitchen, said that they saw Rontaila laughing and dancing.
Rontaila recommends these pretzels to the little bunnies for energy and for fun play.

Haven’t you tasted them ,yet?